Congrats to EVERYONE who helped make September 8, 2018 a GRAND SUCCESS!

SambaLá Samba School shined brightly on Saturday, September 8th in downtown Boca Raton performing before a capacity crowd at the annual Brazilian Beat at Mizner Theater. The first presentation was a colorful and lively parade which wowed the crowd and the second, a show on the main stage with Diogo Nogueira with all the dancers a our pounding bateria closing out the event to shouts of “ENCORE”!

This year’s parade was in honor of the samba school Mocidade (youth) which won the Rio samba competition in the Sambadrome in 2017. They donated costumes including drum corp costumes, baianas, and a harlequin costume group to SambaLá which were on display during the parade and stage show.

SambaLá also sang the 1985 song from Mocidade during their parade. A TShirt or “Abada” was also made in honor of Mocidade by Igor Leal and D’Samba.

Diogo Nogueira, the principle performer of the night met with members of SambaLa Samba School before the parade. Interviewed by Planeta Brasil’s Fernanda Pontes, Diogo posed for pictures, danced samba, and even played the drums.

Planeta Brasil, an international show in Portuguese on the Globo International network was recording interviews and images the entire day creating a story about SambaLá which will air to over 2 million Brazilians world-wide.

Award-winning composer, current Carnaval Director of Salgueiro Samba School, and owner and designer of the sambistas lifestyle line D’Samba, Igor Leal came to Florida exclusively for the parade and stage show and was instrumental in helping get Diogo Nogueira and SambaLá come together on stage for the spectacular fnale. Before the parade and show, he gave a workshop to the singers, composers, and bateria and gave all-around support for the school.

Also exclusive to the event was former King of Rio Carnaval for 10 years and carnaval director in Rio for SambaLá for the last two, Alex de Oliveria served as Master of Ceremonies for the parade. Alex was instrumental in assisting with the parade preparation and order of components in the parade as well as working with Carnaval Artist Doris de Hilster on the costumes.

The parade this year was one of the best in SambaLá’s 24-year history. The costumes were designed and directed by carnaval artist Doris de Hilster.

Here is an amazingly beautiful one minute video vignette of the parade by Boca Voice:

The front commission that opened up this year’s parade was inspired by the character “Dr. Ze Pelintra” and designed by Doris de Hilster, the school’s carnaval artist. Dressed in white suites, red ties, and hats, the group danced their way down the parade route in typical male samba style.

Ze Pelintra is a patron saint of the rough streets of Rio and represent those who are “streetwise”. They are colorful characters who dress nicely but who can be too clever for their own good.

Pietro, the youngest participant in the group stole the show with his dancing, jumps, and twirls.

The bateria or drum corps lead by master drummer and director Claudio da Silva was by far the technically best in SambaLá’s long history with Rildo Ramos commanding the lead repinique, and Carlos Gimenez on the 3rd surdo. The corp of the drummers had practiced two years for this moment and it showed. The drummers were wearing pants from Mocidade samba school who won the 2017 Rio Championship. The drum members played their hearts out with synchronized breaks, dynamic rhythms, and powerful precision.

And during the stage show with Diogo Nogueiro, the Bateria lead by Claudio WAS the show! Congrats to every member of this amazing drum corps!

The singers were lead by lead “puxador” Marcelo Andrade who was joined by Igor Leal, multi-champion samba composer from Rio de Janeiro who came specifically to the event to take the music to higher levels. They opened up the parade with “SambaLá Chegou” our 2015 samba and then sang Mocidade 1985 to pay homage to our future mother samba school.

The passistas or samba dancers were one of the strongest groups ever and with costumes which were the highest quality and most ornate in the schools history. Lead by the godmother of SambaLá, Valeria, she was joined by samba teacher and Muse Andrea Araujo, queen of the samba drums Lorena Moriana, and passista Monique and mail passista Jivago Bertoni. Lorena was wearing the most elaborate samba queen costume in SambaLá history which was from the collection of Particia Chelida, the muse of one of Rio’s top samba schools, Imperio da Tijuca which has the same colors of SambaLá: blue and yellow.

One of the most traditional groups in all samba parades are the baianas or large hoop dress costumes which are reserved for the female dancers in the group and who can be found twirling during the parade. Along with the beautiful Brazilian Flag baianas designed and made by carnaval artist Doris de Hilster, were dresses from Mocidade samba school who won the 2017 championship. The costumes were some of the most photographed costumes of the day.

The flag-bearer had a very important job this year: to carry SambaLá’s first new flag in24 years. With great grace and style, Lilian Koning and Edimarcos da Silva did the school proud showing the world who was parading on this day!

The children’s dance group were dressed in some of the most elaborate costumes SambaLá has seen and they were inspired during the parade, breaking into samba whenever the drum corp kicked into high gear. The future dancers of SambaLa can be seen coming from this new crop of young dancers!

The highlight of the costumes where two huge and elaborate costumes worn by Katia Epstein and Silvia Santos. Katia was wearing an all green costume that was a giant parrot that was over 8 feet tall while Silvia’s blue and white costume was a display fit for a goddess. Both were designed by Carnaval Artist Doris de Hilster, made to specifications in Brazil, and shipped here in August of 2017. But because of the hurricane, they were in storage until a month before the event where they debued to legions of fans taking videos and photos of these “works of art”.

After meeting with SambaLá before the parade, Diogo Nogueira, working with Igor Leal, arranged to do a big finale with SambaLá Samba School on stage, closing out the night.

The stage SambaLá show started in spectacular form with the four principle SambaLá dancers taking the stage with Nogueira. Singing and dancing with the dancers, Diogo the called for the bateria and to the surprise of everyone, the entire samba school went up on stage and dance and played as Diogo sang some of the most famous samba songs with the audience yelling and screeching with delight to the super extravaganza they were seeing for the first time on the main stage.

SambaLá remained on stage for another 15 minutes with the crowd dancing to the drum corps. And when it was over, the crowd could be heard chanting for “More!” 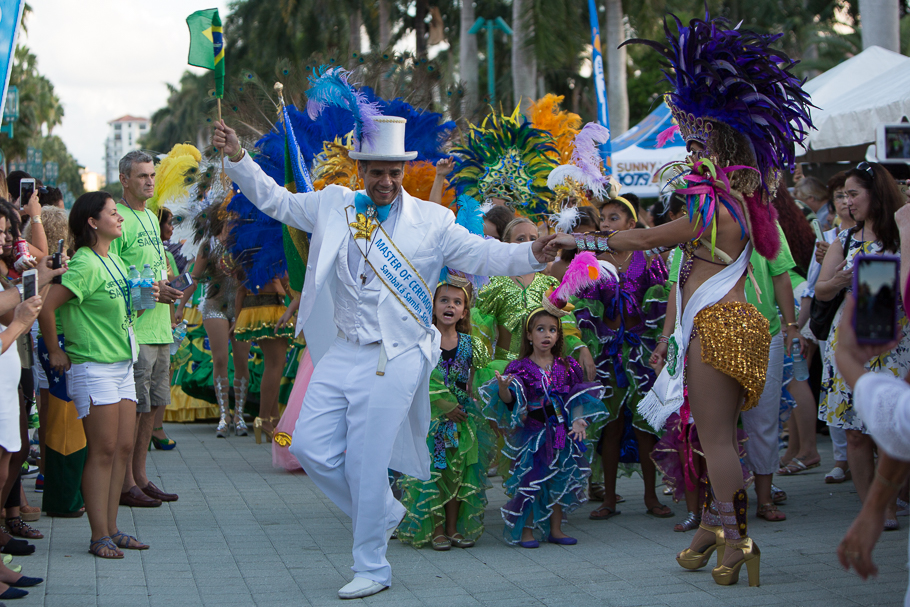 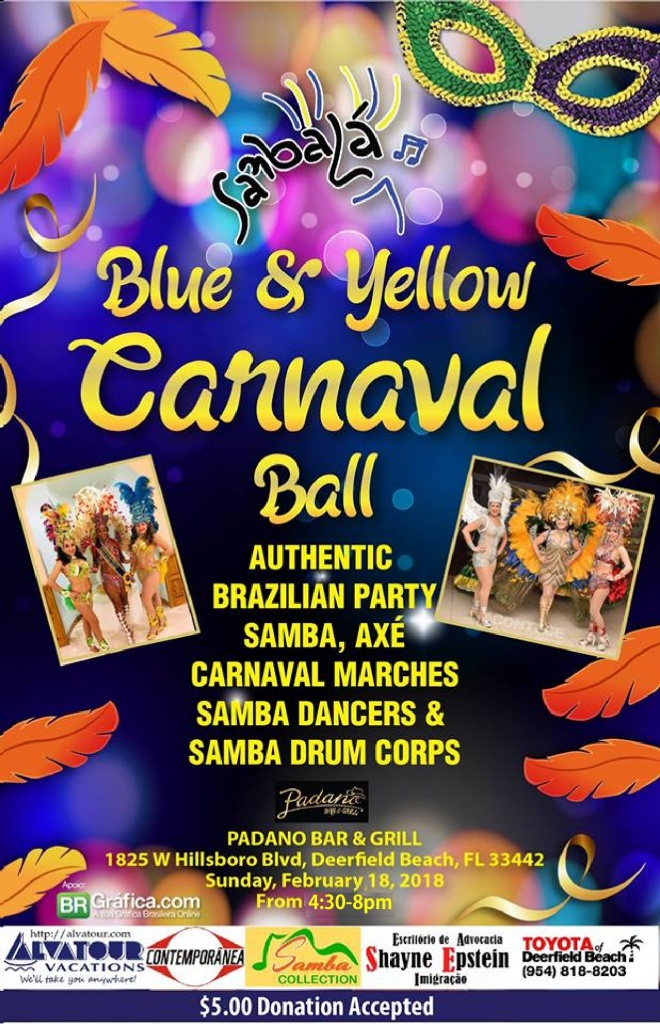